Earth is considered as most inert material. However, due to its low tension carrying capacity, designers are compelled to increase the tensile strength of earth/soil by providing reinforcement (metallic/ polymeric). The incarnation of the reinforced soil retaining systems provide extra tensile strength to soil and serves our purpose (Schlosser 1988). In last decade, reinforced earthwork or soil wall has gained popularity in India, particularly in flyover approach construction due to their relative advantages over conventional retaining walls. Reinforced soil walls are superior both technically and economically in comparison to the conventional retaining wall construction. Construction is simple and requires less working space. Due to its compact design, reinforced earth retaining walls can be constructed in congested areas too (Durukan,1992). The walls are aesthetically more appealing. In reinforced soil system pre-cast panels are erected vertically by providing reinforcement periodically as per designs. Under the load of earth above the reinforcement gets active and the entire system readily takes tension Construction of Reinforced Earth Wall involves three major tasks:

Precast work starts with working out the quantities of the number of panels required for the given project. Since setting up of casting yard is capital intensive, it is desirable to setup common facility for different work packages.

Setting up the casting yard

Depending on the quantum of panels to be casted, the project schedule and desired steel moulds are fabricated. Moulds are setup on concrete bed with allowable tolerance. Bottom face (i.e. the outer face when erected) is permanently fixed and may have desired pattern as they face exterior, whereas the sides of the moulds are provided with nut-bolt mechanism for ease of assembly. 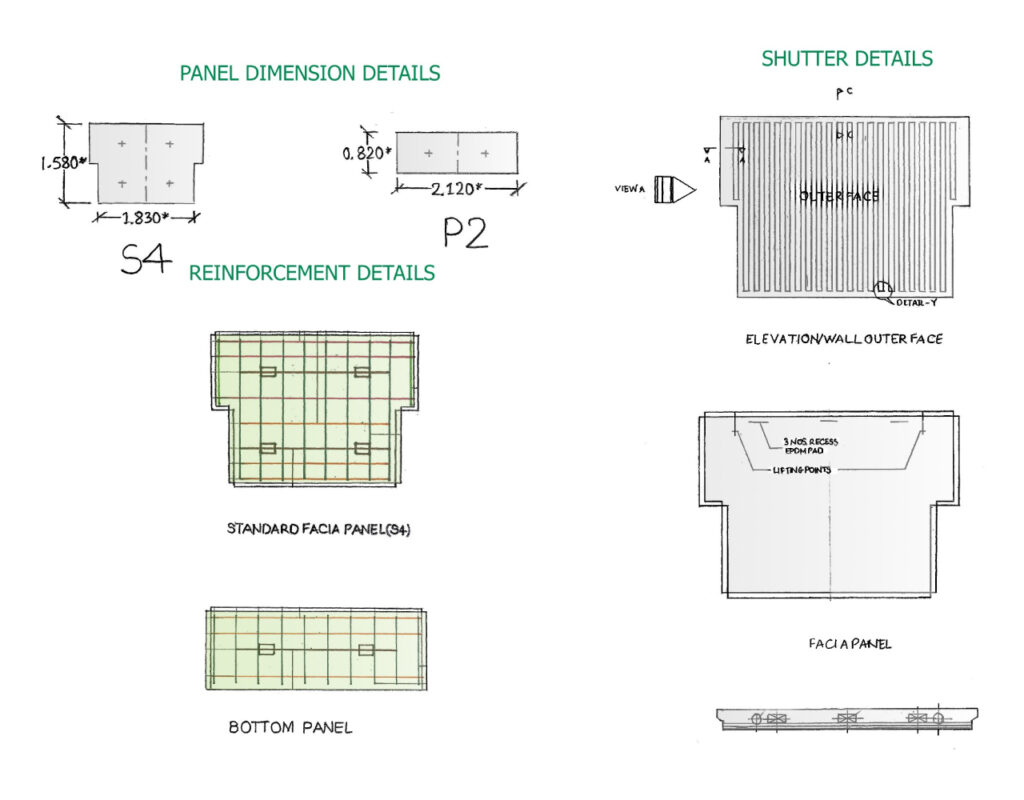 Casting of the panels

Stacking of the cast panels

After requisite curing period, panels are shifted to stacking area either using crane or gantry. Stacking of the cured panels happens in the stacking yard, where precautions are taken to prevent breakage and overloading. No more than six panels should be stacked, the connectors of the panels should be taken utmost care of to ensure they are not damaged; the I-bolts given must face same side to facilitate easy transport of panels.

Transportation of Panels to Site

Upon receiving requirement from site, the stacked panels are transported on site using trailers. Following precautions will ensure the durability of panels: Place the bottom panels on rafters, no more than four panels in a row; at-least 200 mm gap to be maintained using wooden/concrete blocks; the panels must be chained while transporting; the speed of truck must be such that the panels are not damaged due to jerks. 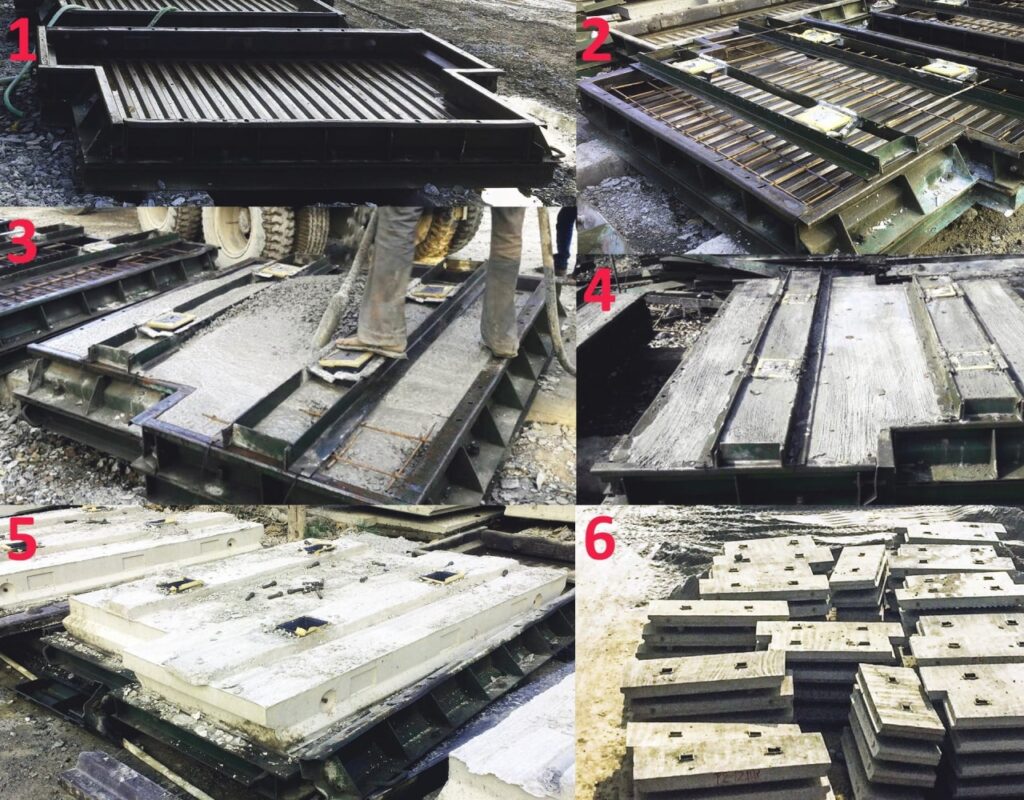 Surveyor provides coordinate so that line out can be carried out for excavation work. Simultaneous check of level is carried out at interval of 1m using auto-level during the excavation. Excavation is carried out by. Dressing and levelling of excavation soil is carried out by soil compactor. Once again survey coordinates are established along with checking the exact levels for PCC work. PCC work with specified thickness and width is laid on which a key is provided on the outer edge for holding the panels erected.

Once PCC is completed again coordinates are marked on it and now final line out is carried out for erection of panels. Bottom panels are erected leaving appropriate space for placing panels above. Placing is carried out using hydra. Placing proceeds from the abutment side. Props are erected temporarily on the outer face to provide lateral stability. 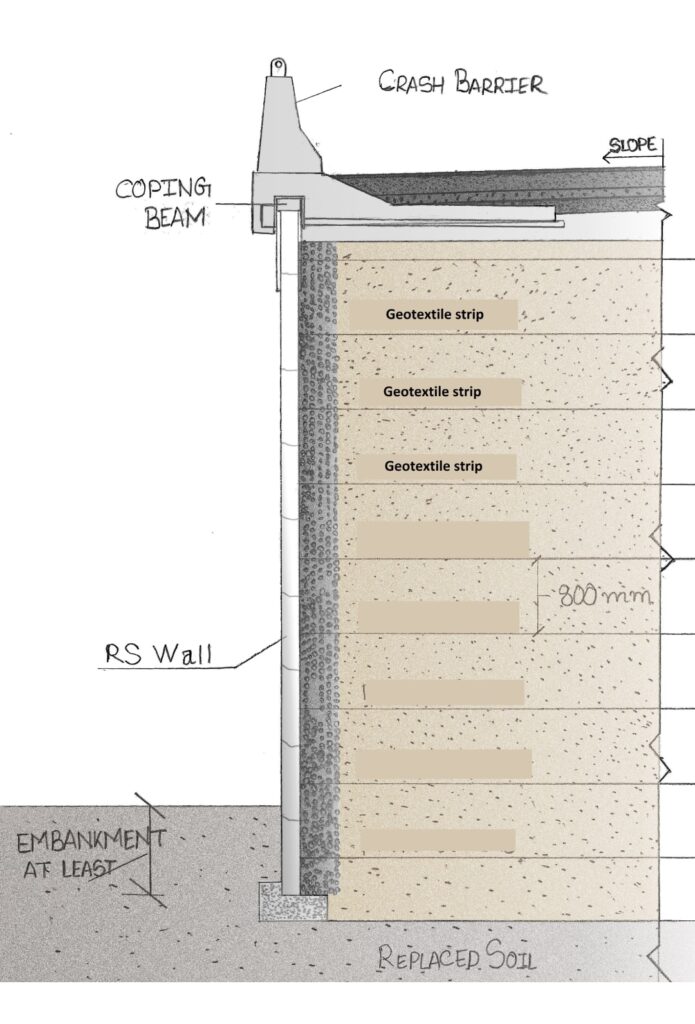 Alignment Check: Spacers of required dimensions are prepared to check the space between two panels. Top of each erected panel is checked using spirit level to ensure that panel is horizontal. A crow bar is used for minor adjustments.
After the alignment check, standard panels are placed above the bottom panels. Temporary hard wood wedges are firmly placed in the vertical joints near the bottom of panel being erected with shoulder of the below one. Wooden wedge spacers are used at horizontal joints too. After placing all the panels, again all the three alignment checks are performed.
After both horizontal and vertical alignment, non-woven geo-textiles are glued at exposed joints. After erection of first layer, approved material of desired density is used to fill up the layers.
Filling and compaction happens in layers of 200 mm each. Once compaction covers the sand/earth-fill, further sand filling happens followed by insertion of 10-20 mm aggregates in width of 250 mm. Gravel filling happens amongst panel and sand layers for purpose of storm water draining.

Filling is carried out up to the level of connector after rear anchor bars are fixed. Installation of para web commences by looping it around the rear bar allowing a 2 m overlap with S-Clamps. Para web is passed through the connector by looping around the bar inside the connector and then laying is continued towards the rear bar. After that tightening of para web commences. Subsequently sand filling and compaction commences over the para web. EPDM pads are placed in the grooves of standing panels and erection of second layer commences. Same process repeats till the required height as per drawing is achieved

Dirt wall stands on the abutment and is casted simultaneously when RS wall construction goes on. Once panel laying activity completes, coping beam is constructed (figure-5). After that road work commences as per the drawing specification. 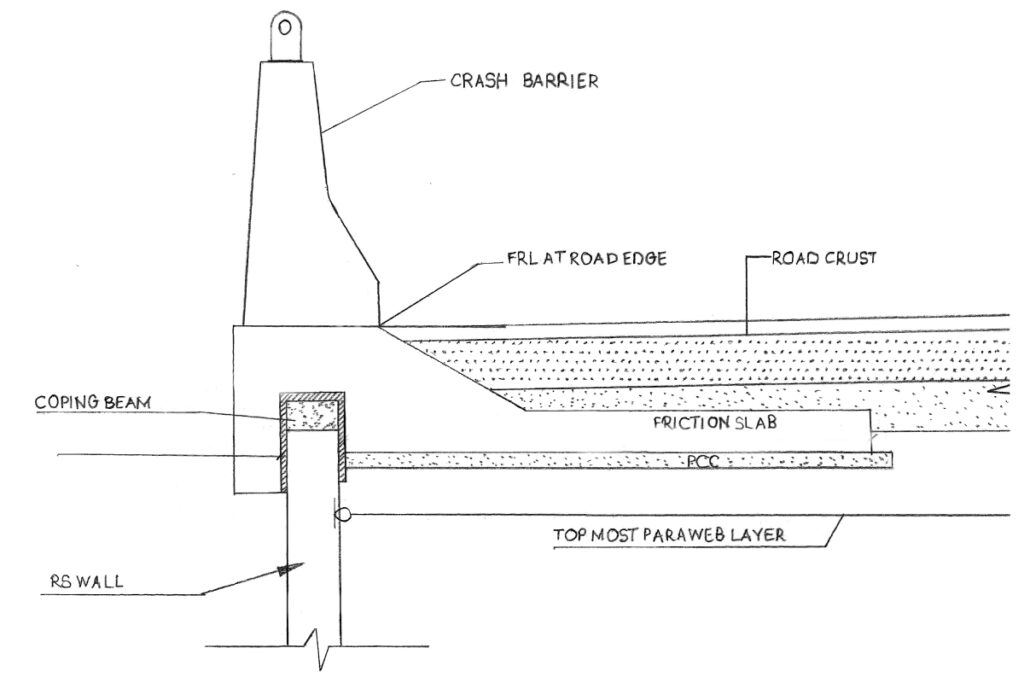 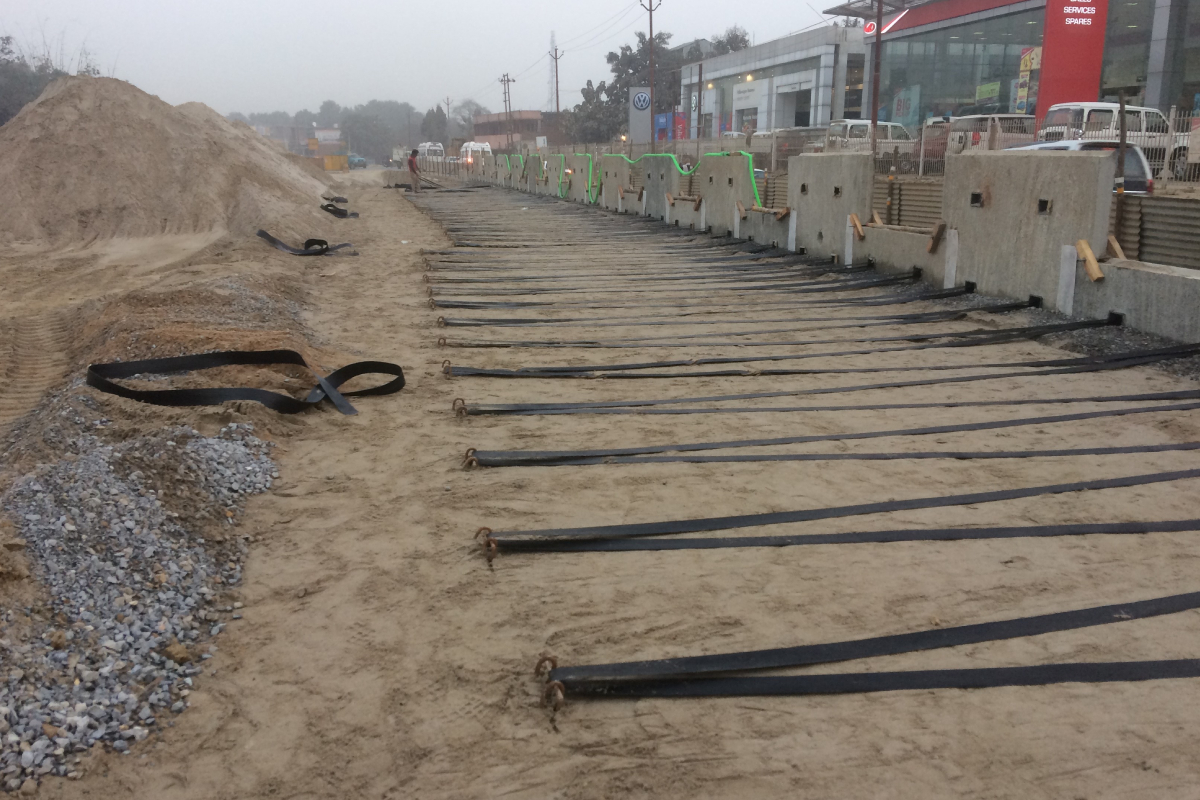 Polymeric material for bearing tension Different varieties of reinforcing geo-grids are available in market. Geo-grids are manufactured using extrusion, welding, and weaving process. The polymers used in manufacturing include PET, HDPE, PP, and PVA (Lelli, Laneri, & Rimoldi, 2015). When polymer geo-grid reinforcement are used in cohesionless soils they provides good interlocking with soil, and composite of nonwoven and woven geotextiles are used for nearly saturated cohesive soils, which facilitate drainage and tensile reinforcement to the backfill (Tatsuoka, Tateyama, Uchimura, & Koseki, 1996).

Reinforced earth walls are becoming popular owing to their ease of construction, economy, and aesthetic looks. Several companies manufacture geo-reinforcement, a key element in RS walls, and hence availability is not an issue. It is simple construction work but it still requires similar precision expected in any other engineering works. Experts also recommend real time monitoring of the reinforced soil work with embedded sensor for health monitoring and to avoid catastrophic failures.